The timelessness of the Office, a meditation by a holy cardinal 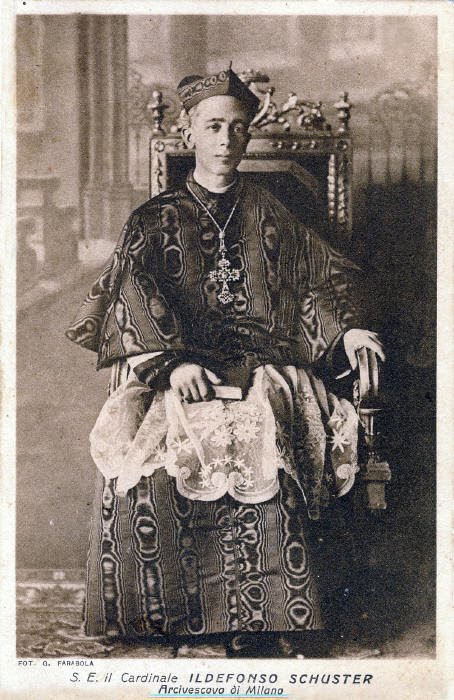 Over at New Liturgical Movement, Gregory DiPippo has translated (out of Italian) a beautiful meditation on the praying of the Divine Office by Bl. Card. Ildefonso Schuster, Archbishop of Milan, 1929-54.

For Mr. DiPippo’s commentary, please see the NLM post, because it gives some context to the quote and when it was made.

I close my eyes, and while my lips murmur the words of the Breviary which I know by heart, I leave behind their literal meaning, and feel that I am in that endless land where the Church, militant and pilgrim, passes, walking towards the promised fatherland. I breathe with the Church in the same light by day, the same darkness by night; I see on every side of me the forces of evil that beset and assail Her; I find myself in the midst of Her battles and victories, Her prayers of anguish and Her songs of triumph, in the midst of the oppression of prisoners, the groans of the dying, the rejoicing of the armies and captains victorious. I find myself in their midst, but not as a passive spectator; nay rather, as one whose vigilance and skill, whose strength and courage can bear a decisive weight on the outcome of the struggle between good and evil, and upon the eternal destinies of individual men and of the multitude.

For my part, though, this quote captures so many great qualities about being Catholic, and it shows the error in frequently changing translations.

The timelessness of Latin leads to preservation.  This preservation is captured in the Office, where the pray-er can, through daily repetition of the Psalms, be easily led to memorize the texts.  This, in turn, leads to a greater ability to meditate and reflect on the glory and goodness of God (much like spending time with an old friend is much easier than meeting new people and making deep connections).  You lose this by silly revisions of the Latin text (the Pian Psalter), you lose this by constant revisions to the Office (1910, 1955, 1960, 1970ish), and you lose this through the introduction of the vernacular and the constant revision of the text.  You also lose this preservation and repetition by coming across the (slightly-less-than) entire Psalter over four weeks.

I just really love this reflection by the good blessed Cardinal.  “I breathe with the Church in the same light by day, the same darkness by night”, “Her prayers of anguish and Her songs of triumph”….

It’s wonderfully poetic and it shows the glory and greatness of the old Office.

1 thought on “The timelessness of the Office, a meditation by a holy cardinal”