(New) Evangelizing in the city centers 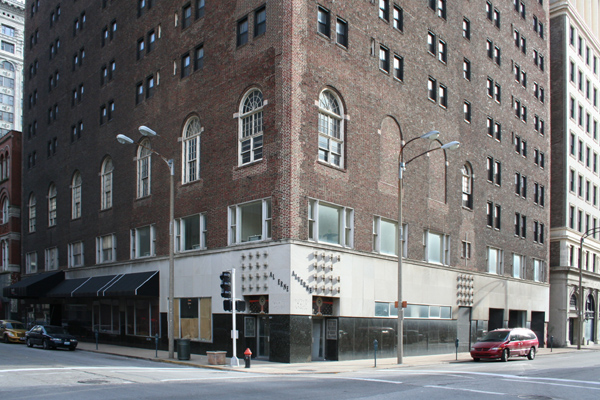 Some months ago, while walking from a parking spot out to a brunch location in St. Louis, Beth and I stumbled across a very interesting plaque.  It read “Our Lady of the Angels Eucharistic Shrine, 1957, Dedicated May 11, 1958”.  Doing a little searching and research, I found out some really cool history of Catholic downtown St. Louis.

The site is the old City Club of St. Louis, which became the Hotel DeSoto, which then became the Hotel Alverne.  The Hotel Alverne was a senior’s home which was operated by the Franciscan Sisters.  It was purchased and converted in 1956 by the Archdiocese of St. Louis.  Tile mosaics of monstrances were installed above two entryways, and a ground floor chapel, which was open to the public, was dedicated in 1958 (as the plaque stated), and it featured stained glass from the famed Emil Frei company.  The Shrine was operated by the Capuchin Friars, who offered up to five Masses each day, and offered separate times for confession, for workers and shoppers alike.

Nowadays, you’re lucky to find a church that is open in an urban area, much less having Mass at convenient times throughout the day.  If they could couple the old ministry with perpetual adoration, you would have an accessible and welcoming spiritual oasis for the laity, who might be seeking relief and relaxation from the stresses of daily life and that is open around-the-clock.

If we truly want to meet people “where they are”, what better way is there than to establish chapels, shrines, and oratories like this?  Particularly in this Year of Mercy, what is more merciful than the Holy Sacrifice of the Mass and confession opportunities?

1 thought on “(New) Evangelizing in the city centers”